The Extra Virgin Olive Oil of the Italian Convents

Not everyone knows, however, that it was the monks who most of all preserved and later spread the ancient practices and knowledge about the cultivation of olive trees.

Today, quality extra virgin olive oil is universally celebrated as a concentrate of beneficial properties for our organism but it is said that in ancient Rome these properties were already known. However, there was a period in the ancient history of Italy, when the olive tree and its main product, oil, risked being forgotten forever. After the fall of the Roman Empire, thanks to the barbarian invasions and the consequent partial abandonment of the countryside, the oil was replaced by cheaper animal fats such as lard and lard.

Today, fortunately, the production of olive oil thrives and has become an irreplaceable part of the Mediterranean diet. Not everyone knows, however, that it was the monks who most of all preserved and later spread the ancient practices and knowledge about the cultivation of olive trees.

It was in the twelfth century that the monks began the recovery of olive groves helping to bring olive oil back to the center of the diet in our peninsula.

The monks have not stopped since then, and faithful to the rule "ora et labora" continue today as then to take care of the olive groves of the monasteries, with full respect for nature and traditions.

The production process provides that, immediately after harvesting, the olives are cold pressed mechanically in the mill, often already inside the monastery itself. This, as we well know, allows the extra virgin olive oil to maintain all its well-known qualities.

But let's move on to a little tour among the monastic excellence of Extra Virgin Olive Oil.

From the province of Savona in Liguria, more precisely from Loano, comes the Extra Virgin Olive Oil of the Discalced Carmelite Friars of the Convent of Monte Carmelo.

This oil brings with it the typical flavour of the Ligurian Taggiasca olives with which it is produced, characterized by a fresh and strong taste, sweet with barely perceptible bitter and spicy notes. The slight herbaceous scent is accompanied by a more pronounced one of almond. Recommended in combination with fish and shellfish dishes, the Discalced Carmelite Friars of Loano Oil is also excellent on salads, cooked vegetables and bruschetta.

But let's move further south, in Tuscany, where we find a monastic production of excellent quality: the Extra Virgin Olive Oil of the "La Poggerina" Farm of the Friars Servi di Maria. The area is that of Figline Valdarno, near Florence, and the monks' olive groves are located in the valley where the Arno river flows close to the Chianti Mountains.

With its strong and intense taste, the "La Poggerina" oil is very persistent on the palate with a good aromatic finish that makes it excellent to give flavour to green salads, vegetables and fish dishes. The advice, to enjoy the best of this oil, is to try it simply on a slice of typical Tuscan bread, perhaps grilled and rubbed with fresh garlic.

Let's stay always in Tuscany, but let's move towards the Sienese hills. On a hill close to the famous gullies of the Crete Senesi, lives and works the community of Olivetan Benedictine monks of the Abbey of Monte Oliveto Maggiore, which was built in the Middle Ages along the ancient Via Francigena, soon becoming a reference point for pilgrims passing through it on their way to Rome.

In the Ombrone Valley, close to Mount Amiata in the province of Grosseto, certified organic Extra Virgin Olive Oil of Siloe is produced. Produced by the community of Benedictine monks of the Monastery of Siloe, this oil is obtained from the excellent Olives of typical cultivars of the Tuscan Maremma; its taste is typically intense, fruity and fresh with hints of almond and artichoke.

Due to its rich texture and slightly spicy and bitter persistence, typical of Tuscan oils, the Oil of Siloe is mainly used raw to flavour soups, vegetables but also roasts and meat in general.

A small and very limited production, almost for "just friends", is that of the Trappist nuns of Valserena obtained exclusively from the Lazzero variety of olive groves surrounding the Monastery, in the hinterland of Cecina, near Livorno.

After the parenthesis of the Tuscan Monastic Oils, we move on to another high quality oil. On Mount S. Giorgio, a promontory overlooking Lake Garda, in the province of Verona, stands the Monastery of the Camaldolese Monks of Bardolino. It was founded in 1663 and is surrounded by 9 hectares of ancient olive trees. The Extra Virgin Olive Oil obtained from these olive trees has a particularly delicate and balanced taste between fruity, bitter and spicy notes, with a sweet almond aftertaste. Famous for its very low acidity and easy digestibility, the Oil of the Camaldolese Monks of Bardolino is typically used both on simple salads and on meat and fish dishes.

The last monastic production we are talking about is that of the Trappist Nuns of the Cistercian Order of Vitorchiano, in the province of Viterbo, in Lazio. Famous for their Jams, the Trappist Nuns boast a small production of unfiltered olive oil with a delicate, sweet and fruity taste and overall well balanced, excellent both on fish dishes and on simple soups and bruschettas.

(All the productions listed here respect the environment and traditions, and are therefore characterized by seasonality. Their availability, throughout the year, may be limited or even absent in case of adverse seasons!) 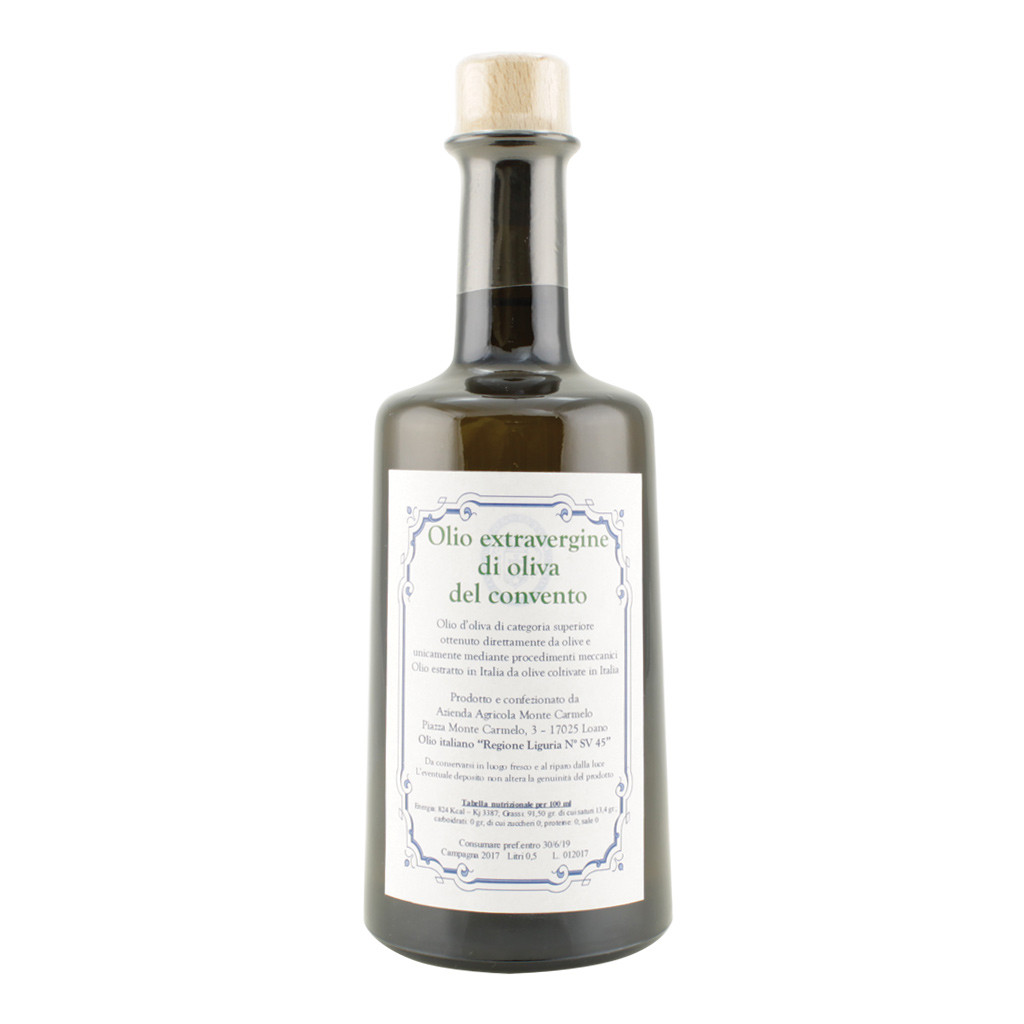 of the region Liguria, Carmelites of Loano 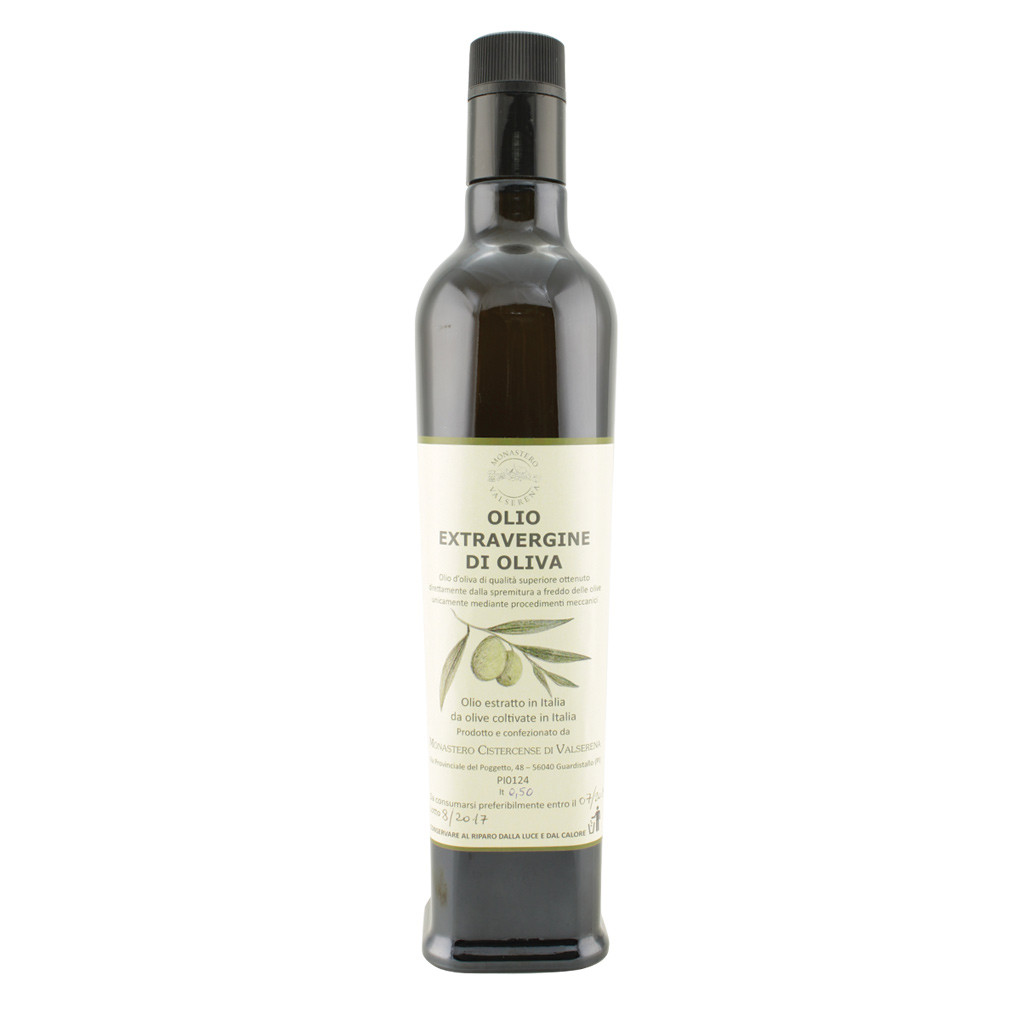 of the region of Tuscany, Trappists of Valserena

of the region of Lazio, Trappists from Vitorchiano

of Lake Garda, Camaldolesi of Bardolino 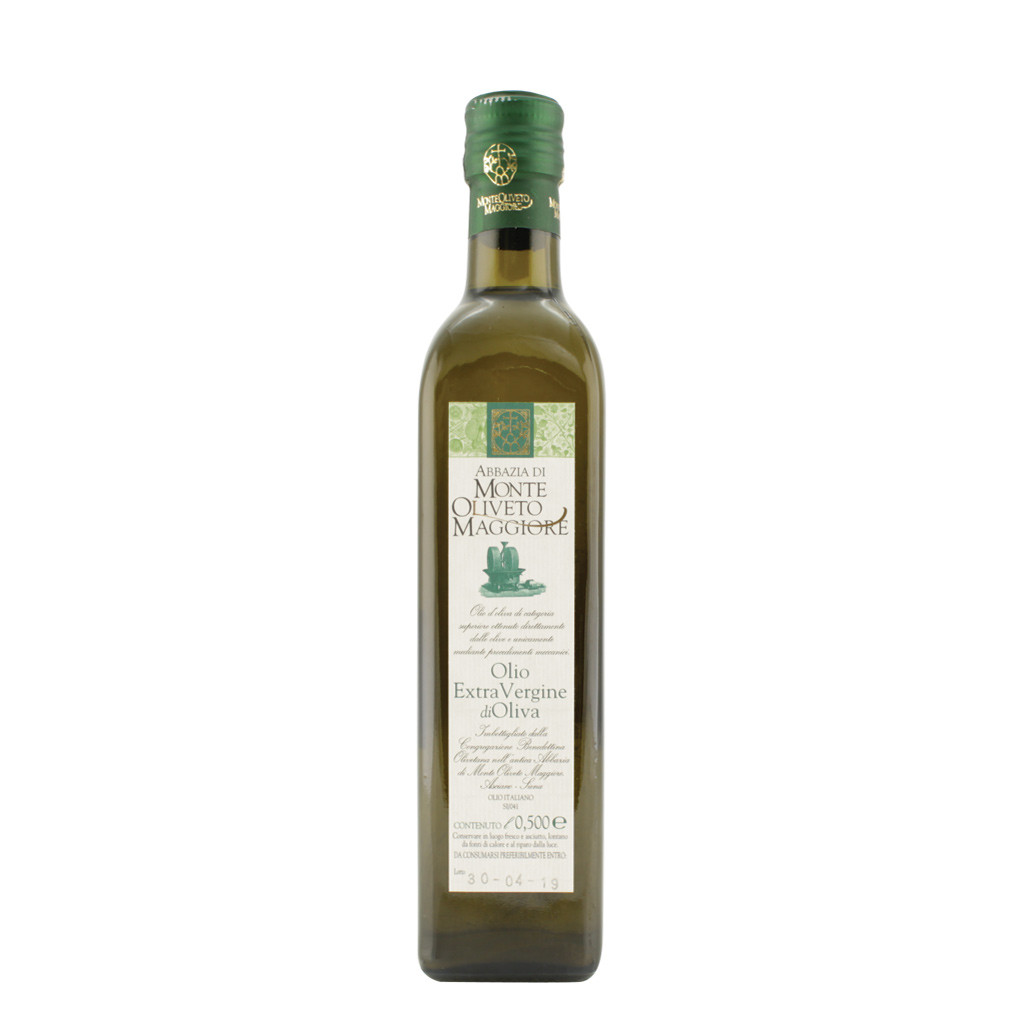 of the region of Tuscany, Olivetan monks 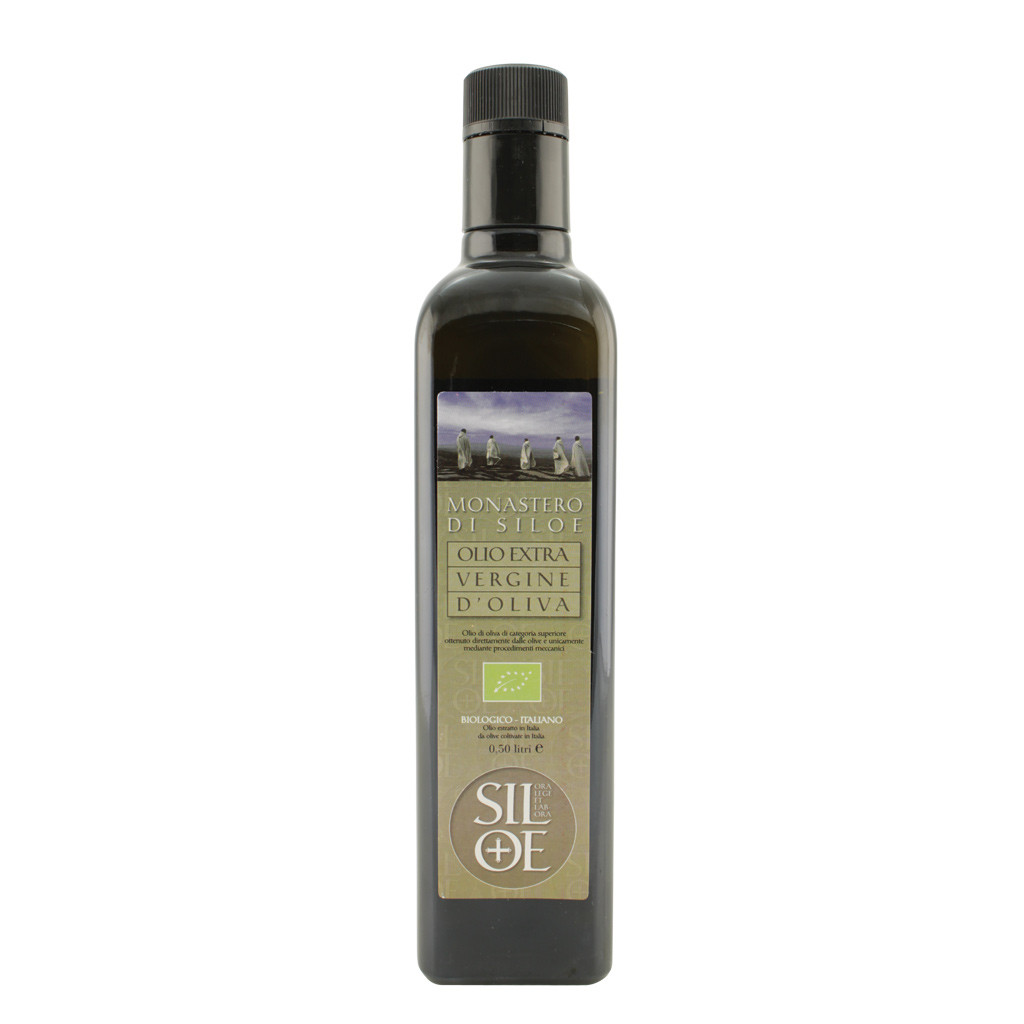 of the region of Tuscany, monks of Siloe 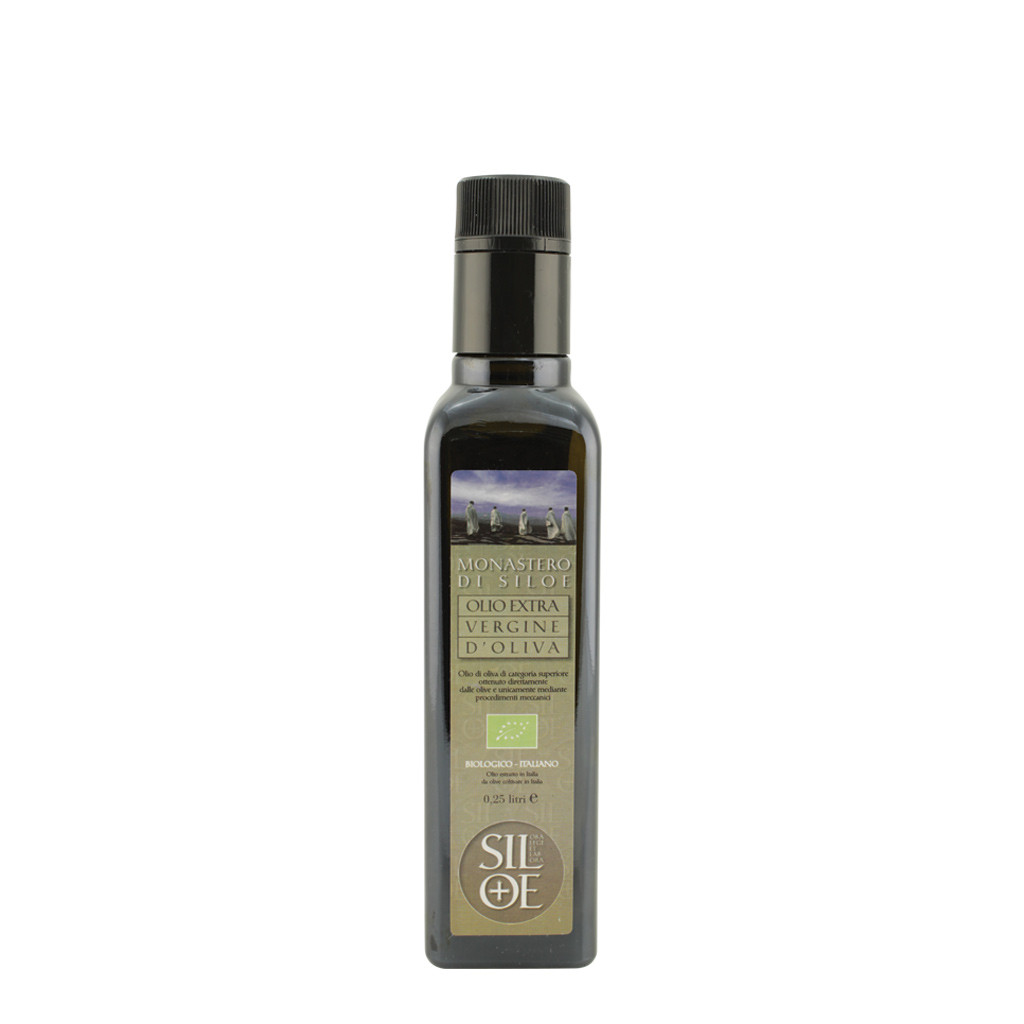 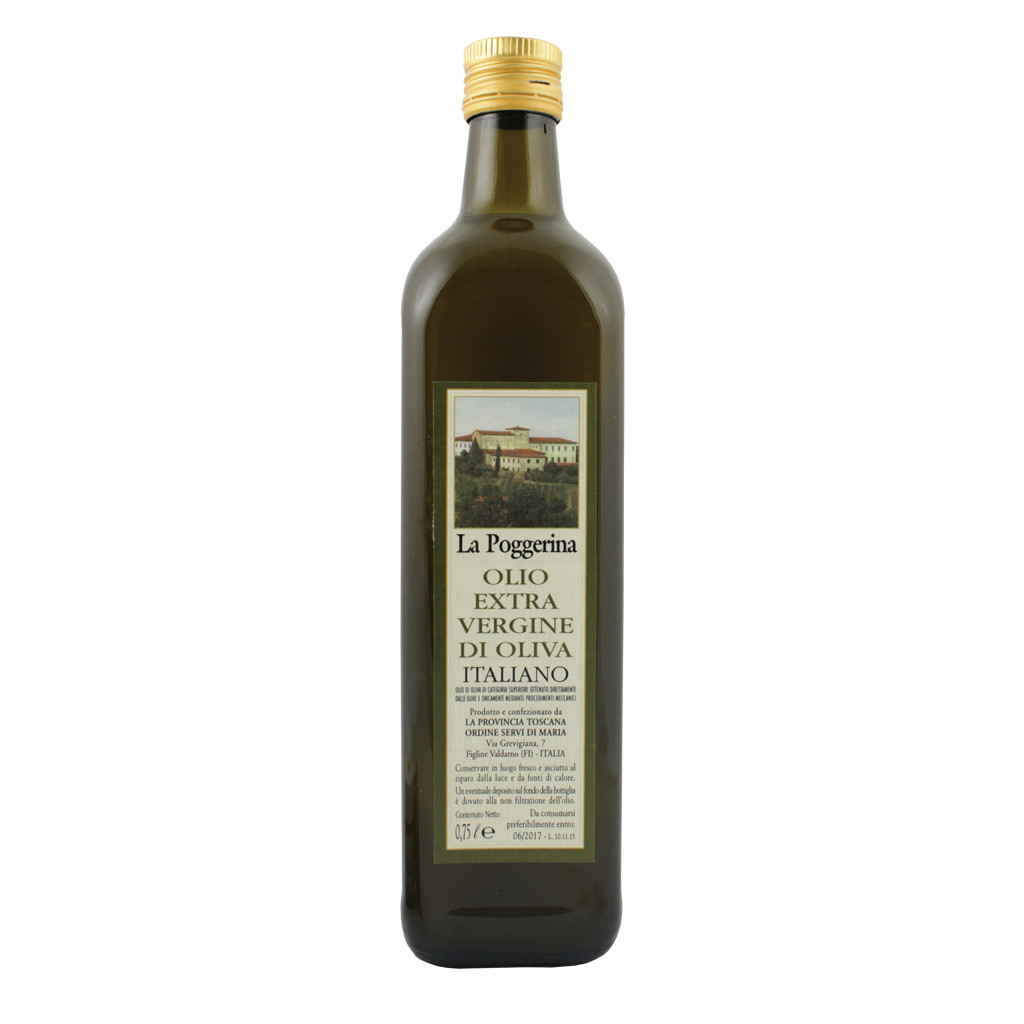 of the region of Tuscany, friars servants of Mary